Last night I took the plunge and downloaded the beta release of Windows 7 and installed it on my Dell XPS M1330. This is the story so far:

Regular reads of my blog will know that I like to keep abreast of software and hardware developments as and when they happen and this is how I come to be writing this post from Windows 7. I am not a Windows fan but wanted to know what the new update is like and what Microsoft will eventually be asking customers to shell out more money for.

I went for an upgrade from Vista Premium at first which took an amazingly long time to complete, about 2 and a half hours. It ran fine, however the internet refused to work which I worked out was because Zonealarm was installed. So, rather than weed out any other conflicts I decided to do a fresh install, working out at about 45 mins in total. And yes, now the internet is working. Wireless works out of the box also, no drivers needed. Display drivers for the M1330 by Nvidia from Dell also work fine. If I have any problems with any other drivers I’ll be sure to post an update. 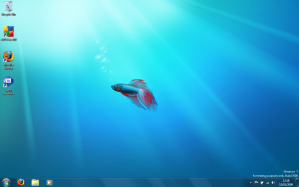 For the new features Microsoft lists as new / improved in Windows 7 I will refer you to this wikipedia article.

I will no doubt be referencing these in future posts on this beta release.

For the main part I notice only a few cosmetic differences after using the operating system, but that is only after an hours proper usage.  Battery life does however seem to be improved when running off it.

I am going to set up a special static page on my blog for listing software that works and does not work with this beta.

That’s about it for now, check back for updates as and when they happen.

Looks like Googles world domination plans are taking a few giant leaps forward this month with the launch of the Google Chrome browser along with their new Android phone.  It sounds and looks pretty nifty, but as I read somewhere else recently.  It is looking more and more likely that when Skynet launches and destroys mankind it will be a Google creation rather than a Microsoft one.

I have long been wanting to indulge in my retro computing fetish.  This isn’t something I have had the chance to immerse myself in before now.  It all stems from my first every computer, the Sinclair Spectrum +2, which I was given for Christmas at the ripe old age of about 8.

I imagine that this bastion of retro computing was what set me on the road to my much too geeky present self.

Anyway, like I say, I have been wanting to indulge myself again recently with a passion.  (It was either that or Hornby model trains…).  So I spent the last couple of days trawling the depths of eBay for a suitable bargain when I came across a rather cheap, working, and decently attired with extras Amiga 600,  (The not so popular Amiga as I have read).  A Buy It Now push of a button later last night and I am eagerly awaiting delivery.  Now all I need is a soldering iron and I can really get ready to indulge in some serious retro modding.

I finally got tired of my old wireless router and it’s ever more frequent reboots yesterday. So I purchased a new Netgear model today.

Now it has been a while since I set up the old one so I was a little rusty and not a little surprised when it came to me needing to call technical support.

Not that I should have bothered.
Virgin Media confirmed that all the settings I had input were correct and kindly forwarded me to Netgear technical support. Before calling either support team I had figured out by myself that the problem was DNS related. Anyway, after spending another half an hour on the phone with Netgear the support staff finally decided that he couldn’t fix the problem and that I would need a call back from his supervisor. This call has yet to arrive.

So why shouldn’t I have bothered calling either companies? Well after putting the phone down to Netgear I proceeded to fix the problem myself….

So what lessons have I learnt?

1. I know more than I think I do sometimes.

2. I know more about Netgear’s products than their support line (This is the first one I have ever owned and I have only had it for a couple of hours).

3. It’s nice when the technical support tells you that they don’t often get calls from ‘people with my expertise’. But not so nice when they are about as much help as an automated message.

4. It might be fun telling the support supervisor, when he eventually calls back, that I solved the problem by myself.